What is a negative ion generator?

It is a machine that makes negative ions.

OK, let's start with the basics:

What is a negative ion?

Enough science stuff. Let's see how this affects you. 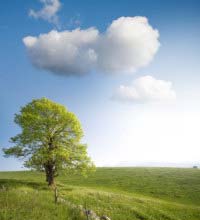 By Any Other Name

Several different kinds of air purifiers use a negative ion generator. You may hear them called ionizers or electrostatic air cleaners. These both charge the air in order to clean the air. These are usually included inside an air purifier.

An ionizer is used to charge the particles in the air before they pass through a media filter. This causes more particle to be trapped in the filter.

An electrostatic air cleaner uses wires to charge the air. It then blows the charged air across metal plates. The particles in the air then stick to the metal plates.

We think there are a couple of problems with these machines.

We think a negative ion generator may help you feel better. In our opinion it does not do a good job of filtering particles out of the air. We think that you should not waste money buying one of these.

However, using a negative ion generator as part of an air purifier is a great idea. Several companies offer air purifiers that combine these generators with regular media filters. These are highly effective and do a great job cleaning the air. We recommend these air purifiers as long as they do not produce ozone.