What causes hay fever? Millions of people suffer from hay fever allergies. Are you one of them? 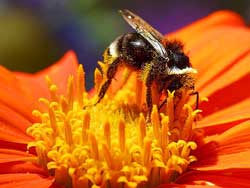 Pollen from these flowers doesn't cause allergies."

People usually suffer from spring until fall. When you are affected with hay fever depends on what kind of pollen you are allergic to.

What causes hay fever? It is commonly caused by the pollen from trees, grasses, or weeds.

In early spring allergies are caused by pollen from trees. In late spring and early summer they are caused by grasses. And pollen allergy symptoms in late summer until early fall are caused by weeds.

What causes hay fever varies from person to person. Some people will be allergic to oak tree pollen while others react to ragweed. In northern areas birch trees affects a large number of people.

The pollens that cause hay fever are from wind pollinated plants. These plants make huge amounts of pollen that is carried great distances by the wind.

During allergy season, many local TV stations broadcast the local pollen count. The pollen count is the amount of pollen in the air. There is usually more in the air on hot, dry, windy days. The count is usually highest in spring and early summer. At this time protect yourself as best you can.

On days with high pollen counts you should try to stay indoors with your windows and doors shut. We have talked before of indoor air pollution. Pollen can be considered and indoor air pollutant. Using an air purifier with a HEPA filter can greatly reduce the amount of air particles inside your house.

Other steps you can take to prevent hay fever allergies are:

To relieve pollen allergy symptoms there are numerous medications available. Some are over the counter and some are by prescription only. Check with your doctor and follow his treatment recommendations.

We at All About Air Purifiers use an air purifier with a HEPA filter every day. We have noticed that during allergy season we spend less time coughing and sneezing. They really do work well. If you pick the right air purifier.

There are many reviews on this site. Please read them and let us help you to pick the best air purifier for your needs.

Leave What Causes Hay Fever Page and Return to All About Air Purifiers Home Page.