Do you have a cigarette smoke allergy?

Someone lights up a cigarette close to you. You get watery eyes. Then you start coughing and sneezing. Next you find it hard to breathe. You could be sensitive to cigarette smoke. 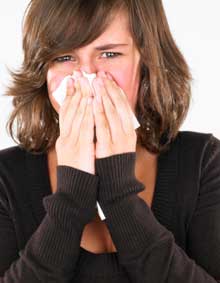 Does smoke bother you?

Some people have debated whether a person can be allergic to cigarette smoke. Is this true? Maybe and maybe not.

Whether it is an allergy or not, it still causes your body to have a bad reaction.

People do not just have a cigarette smoke allergy. You can be allergic to smoke from other sources, too.

We love to sit around a fireplace in the winter. It could be sending smoke into your house causing you to have allergy like symptoms.

A wildfire burning outside can have the same effects.

These problems can include:

Sounds like hay fever symptoms doesn't it? They are almost the same symptoms. In fact, cigarette smoke may make you hay fever worse.

It may not be a cigarette smoke allergy. You may have Multiple Chemical Sensitivity (MCS). People who have MCS react to various chemicals in the environment.

MCS causes sypmtoms like an allergic reaction or even the common flu.

Get Rid of Smoke

The first step to combat a cigarette smoke allergy, or sensitivity is to get rid of the smoke. 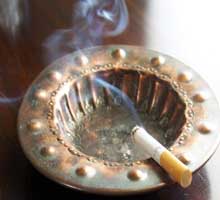 This is one source of smoke that's avoidable.

If you smoke, now is a great time to quit smoking. Not only does smoking hurt you it also hurts those around you. Please read more about the effects of second hand smoke to learn more about the dangers.

If you don't want to smoke or you can't quit right now. Please get an air purifier. This will help remove the smoke from the indoor air. This way others in you family won't breathe in second hand smoke. Read the reviews on this site to find the best air purifier for you. 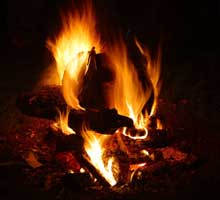 What's Christmas without a fire?

You fireplace can be a source of smoke in your house. The best alternative would be not to use it at all. But if you are like us here, we love our fireplace in the winter.

If you decide to use it, be sure the chimney is clean and not blocked. This will let most of the smoke escape. We hope also that the fireplace is designed correctly to draw the smoke up the chimney. You may need an expert to evaluate your chimney if you're not sure how safe it is.

An air purifier will also help here. It can filter the smoke out of the air so that you and your family do not breathe it. 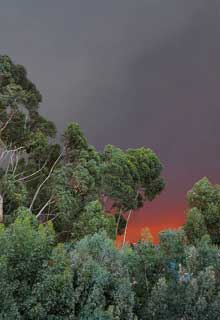 This much smoke is never good.

There are two types of environmental smoke we want to look at. The first is smoke for wildfires and second is smoke from neighbors houses.

Unfortunately we cannot control wildfires. You need to keep your doors and windows shut. Use an air purifier inside to filter the smoke out of the air.

Those of you living in apartments may have smoke creeping into your apartment from your neighbor's apartment. This might be cigarette smoke coming through the wall, or up from the balcony below you. Either way there is not much you can do to stop this smoke either.

The best thing to so is to get an air purifier to keep the air in you apartment clean.

Another problem caused by smoke is the smell. It is very difficult to remove smoke odors. The first step to get rid of a smoke smell is to eliminate the source of the smoke.

In some situations you cannot remove the source of the smoke. If this is the case, get an air purifier. It will remove the smoke from the air. It helps keep the air fresher and cleaner. This means less odors. Make sure you air purifier has a lot of activated carbon. It is the best kind of filter for removing odors.

Cleaning regularly can reduce the smoke smell. There are also commercial odor removers that work well. These can be used on upholstered furniture. Washing clothes, sheets, and drapes will remove the odor.

Whether you have a cigarette smoke allergy or it is something else, smoke bothers you. You need to take steps to get rid of the smoke and the smoke smell.